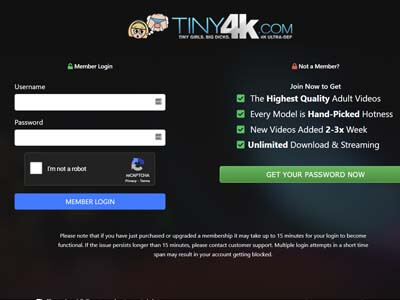 Tiny4K being a simple site without thousands of videos yet, it does have some pros and cons. There are no advanced options to look for porn and you must rely on thumbnails or search. That itself is not a big deal so far, but I do imagine that after a few more years, finding older content should prove to be troublesome. Unless they decide to update the site, which is welcome. Other than that, it’s business as usual. The first tab that I always check is the top-rated section, which gives me a glimpse of the site’s community and the best things that they can pull off. Then it just browsing and searching.

I can assure you that their content in terms of quality is on the highest end of the scale. Just watch a few videos and see if you like what Tiny4K has to offer. I do think that their thumbnails could be better as if you have not already noticed, in nine out of ten shots the cock is always inside their pussy. Not a major thing but I appreciate variety. To sum it all up. The content is great, the girls are hot and the only reason not to try the site out is if you don’t dig tight girls. You get free previews, so no reason not to check those, at the very least. 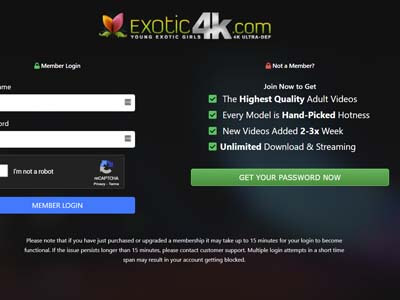 All in all, it has a simple and easy-to-use interface, with a black theme that is not hard on your eyes, a mobile and PC-friendly layout, and no annoying slowdowns. 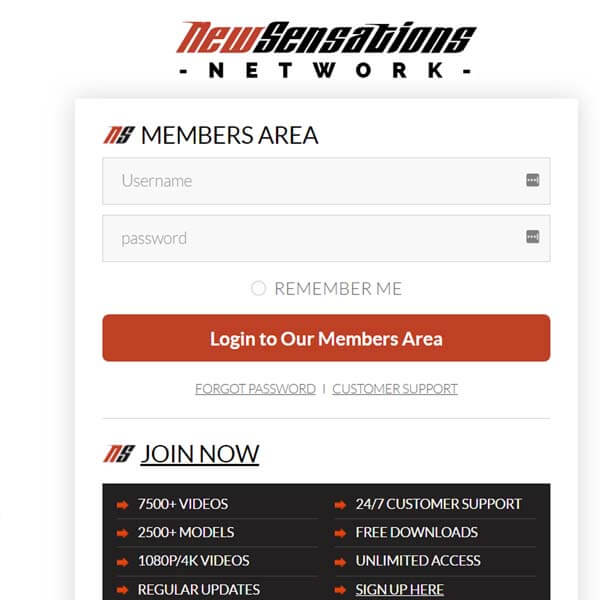 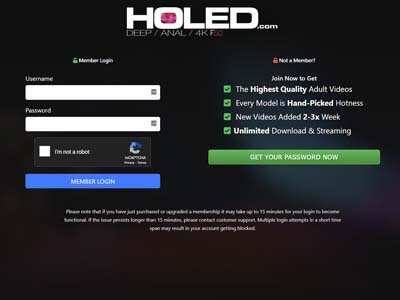 We are talking epic scenes of intense fucking. Some are with warm-up while others go straight to the ass, and you get to see these whores suffer a bit. That is fucking hot. It’s also interesting to see all your favorite pornstars in a brand-new light. Some of them I only was able to watch in 720p before (just on tubes, nothing too extreme), and holy fuck do they look good. People like to say that you can now see their acne and other, boner deflating stuff, but this is just bullshit. It’s not like you are zooming on or something unless you are one creepy dude, bro.

These ladies are beautiful, Megan Rain, Lena Paul, Jynx Maze, and many others. You must get the trial or just try to get their 4K videos somehow, I am telling you, it is the experience that is immersive and unforgettable. Sure, there is a direct consequence for that, which is the price. We are talking 30 USD per month, which is a lot.

You can’t lose with Holed. These guys have been producing solid 4K content for quite some time now, which pretty much guarantees a great bang for the buck. 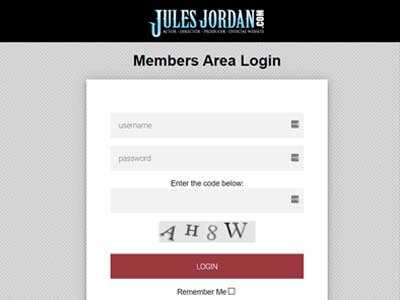 Jules Jordan also includes a couple bonus sites, such as:

With the first one being our all-time favorite, obviously.

Another thing that we did like about Jules Jordan that many other sites lack is advanced search. It does a good job and helps you browse through thousands of videos or find the content to watch.

More studios should do that, but they do not go figure. I did not like that they include ads on the index page, which I found not cool. After all, you are a paying member. Yes, they are masked as deals but whatever, don’t need that shit, thank you.

The last thing that we did enjoy was the ability to rate and leave comments. Some studios don’t even have this function, either because they produced crap that would get rated 1* or they just don’t care. For me, I love interacting with the community and reading various comments. It just brings everyone closer and I love that.

The site would be perfect if not for the “special offer” ads.

In total you get close to 1,600 videos and same number of galleries. The average? Around 180 pictures per set. You are looking at around 273,000 pictures, all zipped and ready to be extracted for your enjoyment.

The picture quality varies on-site basis, but it goes from 1024×768 to 2240×1680. A rather starting resolution but then again, you are going for the 4K video site, who cares about the pics. Now, it is important to note that not all of the videos uploaded there are in the resolution we all desire. Only the most recent ones, which is about one and a half years’ worth of contention, translating to 250+, 4K videos, and the best part? You have daily updates! Fucking daily. The only downside is that there are daily downloading limits too that I am not a fan of.

The overall user interface is straightforward and has all the features one wants. Sorting by the user favorites, latest scenes, most viewed, sorting alphabetically, by tags, and all that jazz. What it does not have is a friendly way to open multiple pages at once due to Ajax’s implementation. You are left with pages that you can’t open in a new window. That is stupid.

All in all, a solid attempt with annoying navigation being the only downside. 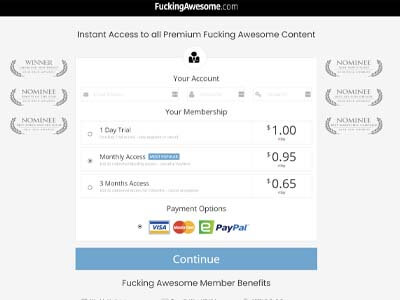 Fucking Awesome does a great job of summing up its content. It’s exactly that, fucking awesome.

Being a freshly launched site, you have a strong advantage, which is: no legacy code or old design elements. Nor sudden user interface changes (for the better) that for some reason still manage to anger the community. Guess that can be said about most of the changes, just look at Snapchat, Messenger, or anything else.

It might not be advanced but with the amount of content, I have found no trouble finding the 4k videos that my dick was craving to see.

The only other negative minus advanced search is the minor one. A separation of previously free and premium members comments, which does not exist as of now. 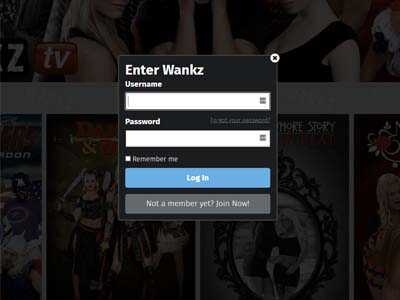 The quality is truly phenomenal, super sharp, with vivid colors and just beautiful. Going back to Full HD feels like you took your glasses off. Or if someone applied a grainy filter on your eyeballs. As far as updates go, they seem to be rather irregular. One month they have one upload only to be followed by seven and so on. So… Try it but go for a monthly or three-month membership just to test the waters out. There will be plenty of content for a little while.

One thing that I found interesting is that instead of stars, it shows like to dislike ratio. For instance, instead of seeing a video that is rated 4 out of 5, there is a rating of 78% or so. I’ve found it to be a better indicator than the old-school system. Guess we have YouTube to thank for that. Since the content is still rather scarce, the pagination and everything is clear and simple to use. The whole content discovery is decent although, without advanced search, I expect this to change when they have thousands of videos. Hopefully, by the time site reaches that stage, the developers will implement that too.

All in all, there are no negatives minus the lack of advanced search that is not mandatory at this point.

See our full review and that should make things clear, or just browse around. Watch a trailer or two.

If you are into sensual scenes, kissing, touching, lesbian, softcore with some hardcore, consider this. Maybe you are tired of brutal fucking, gaping assholes and shit like that. Consider a breath of fresh air, which is all about making you fall in love with the art of fucking.

Give me a free tube site and I will tell you a million reasons why it sucks. Most complains will be the same and revolve around advertising and bad video quality. While there are some tubes that charge you few bucks per month to unlock Full HD and remove ads, I do believe that there are even greater alternatives out there.

The video quality is nice and while it does not represent the real thing, I would say it is around 80-90% accurate, depending on the network. Few 4K videos looked like shit, worse than 1080p DVDs, but most were decent. Yes, expect annoying advertising placements everywhere, but at least it does not spam you with ads that appear when you pause the video.

Not GIF collection, but the actual videos with sound and from start to finish. There is more than one site with few USD trials, and this amount is ridiculous compared to what you have spent on hardware and even worse, your time watching garbage 4K cuts. 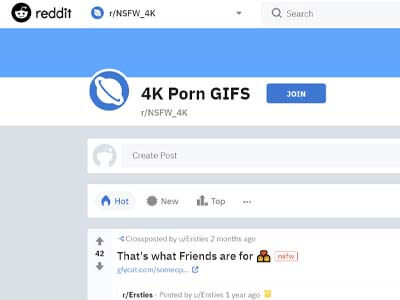 I did check his post history and he is trying to promote his subreddit still, so the hope is not lost. In the end, /r/NSFW_4K is controlled by one user and others don’t seem to care about its fate, or about contributions. For someone that needs fresh content daily, this is not a recommendation. Do you need more than one subreddit though that just reshares the same 4K porn? That’s for you to decide, but since there are far more than a hundred posts, adding it to our 4K sites just is just logical. Not as the top pick or even close to that spot, but considering clean, ad-free design and constant effort, it makes sense for me to do so.

It’s a nice sub and for the first-time viewers, a real value giver. However, next time you decide to visit the site, don’t expect to find much new stuff, if any. Consider other 4K alternatives instead, with sound. The only other solution is to keep browsing the “top” section and always going deeper, page by page, until there are no more posts left. 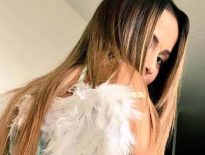