I honestly have no idea how this guy can handle three women simultaneously, and at least some of them look satisfied. Well, I can’t even properly fuck my own. Nonetheless, this scene is fucking hot, and three girls sucking your dick at once is material from dreams, I say.

You know the times when you are just watching other people have all the fun, and no one is inviting you over? Well, this is exactly what happens in the scene. After looking over the shoulder while every other whore is sucking that dick, she is finally invited. I am not sure if this is out of pity or charity.

However, it does not matter if the result is the same and pussy juices flow freely. I’m fairly certain that the dude enjoys his new company.

Just an accidental foursome in a moving train, no big deal. Try not to stare at the 18-year-old chode that still has either dental braces or fucked up teeth. We’ve considered cutting this part out of the scene, but every foursome benefits from some introduction material.

Having said that, I’d love to know and book the destination of this train and go there alone.

Good God, do I miss her, and by that, I mean the sister. She had this firm ass and would walk nude in front of me for no apparent reason that my non-fucked-up mind could think of. Now, I would just plow that bitch.

A foursome is all about the biggest, nasties whore on the whole planet. Okay, maybe in this list only, but Jesus fucking Christ Almighty, you would think that two cocks would already be overkill, but why stop there?

I mean, it is not like I am into dudes anyway it’s just that there is always a certain type of cocks and looks that you prefer. Also, these are probably some of the most well-known names that don’t have last names.

Nasty dirty fucking whores licking one another’s asshole, spreading that brown butter all over the place, and tongue fucking anus. This is a video about cheap sluts where you got them to do whatever the fuck you want without even thinking twice.

You got yourself one dude and three chicks. As you can guess by the name of Perv City, it’s nothing but pretty, and we mean that in the sexiest, hottest way possible. After all, regular foursomes are getting boring.

I am unsure what is so special about the lube and massage oil. However, while the foursomes are already extremely hot and the best, adding magical liquid adds much more to the scene. All the glittery parts and shiny particles…

It’s time for foursome lesbian centipede because why the fuck not? It’s so easy to make a scary movie that makes your dick hard; just make everyone nude, and you are good to go.

I wonder what is going on in these women’s minds when they are doing a foursome like this? Probably thinking how awesome that is or reconsidering their life choices.

Hey, this is the view that I can never get used to and would get a heart attack if I ever woke up to such beauty. But, of course, if you are to replace these hot whores with tiny assholes and get three saggy grannies, that would be material for nightmares.

You got yourself all your great angles with great tits, pussy shots, asshole, and lots of touching. Also, the ending is awesome, and he is into philanthropy; it seems sharing is caring.

Two besties fucking their boyfriends and enjoying the intimate moment. My friend and I fucked different girls in the same room, but not like this.

The number of bodily fluids these four lesbians produced must be in levels of a decent flood.

Name a better peak of an evening that you and three of your ex-girlfriends. Of course, there is no such thing, including illegal stuff.

Do you know what else is not a big deal? Having another cock or pussy.

Never switching positions with partners, Kiara and Eliza are two foursome players that wouldn’t share a thing with you. But, isn’t the whole idea of a foursome to try another hole? What about a second dick? If you are a girl, that is.

At the very beginning, we have four sluts with one disappearing almost immediately, like the tax-payer dollars. Likely went back home to cook her soon-to-be ex-husband the last dinner. The sluttiest Asian on the right is in perfect position and knows how to eat pussy.

You don’t just lie on your stomach and lick that cunt. No, put your ass in the air and wait for the juicy cock to enter you.

No, you don’t end up sucking your dick, dude; use your fingers.

Man, this looks like a company that could benefit from you and me. Acting like in cheap Hollywood movies, Jada Kai and Danni Rivers don’t care about privacy or fidelity. Can someone help me find friends that don’t care about society’s taboos, can fuck, and don’t be scared about offering others?

Strong bonds with friends are formed over foursomes, I swear.

Forming the sweet love rectangle, Elsa Jean joins us for another foursome and behold… It’s another blond on the right, Zoey Monroe. See our other posts if interracial or videos push you to the edge of orgasm. There’s one dedicated explicitly to black dudes and white sluts.

Hmm, should we replace one lesbian with someone else? All known names, tasting their cunts for the very first time, and having much fun. Malena Morgan is also in the mix; in case you don’t recognize that slut.

Just like with women and emotions, this foursome is all over the place. Random oral sex, face sitting, etc. Lacking in direction and needs a male producer.

I would probably have some performance anxiety, even with one chick that is hotter than 2/10. Maybe in the next life, but likely never.

Even without some cheap cardboard glued to a phone, this looks epic. Some can only imagine the original, with surround audio and a 360* camera.

Is this why people go to the sauna? I never understood the hype of these places anyway. Sitting in a hot room where it’s hard to breathe and with your balls boiling is not fun, not to mention that there are likely a few other naked duds next to you. 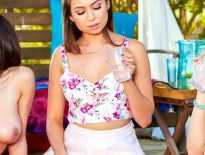