Who knows how to completely drain a pussy or two? It’s Abigail Mac and her lesbian sidekick. There’s more pleasure in this 15-second GIF than in a day of cheat meals. It’s a friendly-fire battle of two hair colors, blond and brunette. Good thing there are no losers in the end!

The latter shows her ninja skills with the violet tongue to pussy attack. Abigail has nothing to do but close her eyes and surrender.

Cindy Shine has a very attractive pussy and an equally cute cunt strip.

This is a female fantasy! So, instead of a demanding boss with massive dong, we get an extremely naughty slut and a new secretary. Work looks fun in this place, and most of us would not mind a hire. After the initial freak-out over bad clothing, Autumn Falls and Darcie go all in.

With nothing but pheromones and female hormones, these pussies are getting blistered by tongues, fingers, even vegetables, or crazy foreign objects.

How can you convince someone to remain lesbian for the rest of eternity? Add a creepy dude on the right that tries to hold their hand during intercourse. That’s it! You’ve done your job. This lesbian GIF is more fun and creepier than hot, but still among the best.

The more you watch, the worse it gets. One eats pussy as if it was her last meal while the slut on receiving end tries to escape the male virgin.

Girls tend to enjoy nice and slow moments, which is where this GIF comes from. Kate and Ellen have mutual understanding and hours to take things the way they like them. A slow way is sometimes better than the highway.

With the smell of cunts in the dining area still there, Abella had an experience worth remembering. How do people feel anyway when the partners they fucked end up dead?

You have some nice bodies, natural tits, self-pleasuring, and pussy rubbing action while another girl is just sitting on the face, grinding that tongue. All in all, a solid seven out of seven.

Not only do two whores lick that juicy pussy simultaneously, but ass eating and pussy eating simultaneously sounds like a very good time. Not completely shaved pussies; some clothing and cheap-ass lingerie make the whole thing even better.

Honestly, this is the first time I have seen someone finger fuck two friends simultaneously in a position that I can only describe as “art-like”. Then, of course, the follow-up and conclusion are your regular oral sex and lots of kissing.

Waiting for her turn, the third wheel just starts rubbing herself instead. She needs a partner, and you are free to jump in.

Now, this is a true slut party, whore like faces, hardcode grinding, no passion, just fucking, intense fucking and pleasuring one another without giving a fuck. So hot and disgusting at the same time, I just wish the last one had slightly larger tits. Also, what the fuck with that skull tattoo?

Sure, at first, you have your regular sensual massage with some pussy licking, lots of kissing, and so on, but almost at the end, it goes south, or west, or I don’t fucking know but seeing these two asses on top of one another, getting licked makes my dick so hard.

Also, watch the amazing tits of the receiver; they are spectacular. The girl on the right licks that pussy like a puppy licks the vomit or his balls. I’d like to say this GIF is hot, but not for the reasons mentioned above.

I love to look at the orgasming women, and this is exactly what NF delivers; seriously, these guys are fucking gods when it comes to lesbian sex or threesomes of any kind; it is just so natural and…

I don’t know; they just work differently, genuine passion everywhere, lots of teasing and kissing, orgasm faces, happiness, and three pussies getting dripping wet. Also, the posies are trimmed, which is so fucking hot. None of that flap shit.

God fucking damn it, having three lesbians fuck one another is one thing but them being super-hot is so much more enjoyable. You got everything here, beautiful bodies, sexy doll-like faces, ass eating, pussy eating with face sitting, lots of pussy and clit grinding, it just goes on and on.

Also, look at these amazing, colorful panties; the whole scene is full of fluffy clouds, rainbows, happy colors, and other female-only goodies.

The following GIF is slightly different and shows you how innovative threesomes can be. NubileFilms is like Albert Fish of the adult industry. As you can see, there are two videos in one. So, steam all the pussy licking and kissing, ass tongue fucking, or whatever else is worry-free.

The best and hottest part is the commentary that the same women get to share with the members of Nubile Films. So hot that I want more of this format; they seem to be super turned on too.

Fuck, hot, help God and I am not sure what else to say. Seriously, butterfly lesbian grinding is incredible, the one who invented this position must or is a God. I am sure this sick fuck is the one responsible for it. 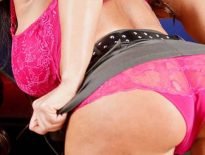