Trust me, finding a list like this was harder than we thought since most of them have turned into a complete shit fest. And if you are into reddit, we have you covered too.

See another update below.

Oh, and the pic above does not do justice since most of his posts are miles long and with multiple gifs.

Well, this is sort of gay and not gay at the same time. The female posting updates is female. However, as you might know, a lot of women love to look at big erect dicks and this Tumblr blog is no exception.

Recently, she began adding more straight posts, like women being throat fucked, etc. so it is still a nice one to check out, assuming you don’t scroll too much.

Just pull out your dick or vagina and start the party.

Listen, I am more of an ass than boobies’ man, but this blog made me appreciate the bouncing beauty too, and that’s why I am including it into our best Tumblr sites list. Honestly, after browsing it for more time than I should, I just want to call my girlfriend and tell her to get breast enlargement surgery.

Also, oh my fucking god, the tits above would start and stop the third world war.

It is like a combination of art and erotica and nice bodies. RedBled approved.

It has some neat videos with sound, but the site is more for people that are silent masturbators. Those that don’t want to risk waking up their spouse, parents, or grandmother. 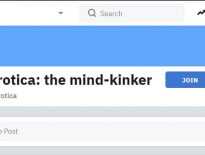