If you have not heard of him, read the interview below and check out his work. This interview is my favorite so far. Primarily because of the fascinating personality traits and few behind the scene stories that were shared. Guys typically don’t like to do interviews and getting one can be tricky unless you’re a big-name magazine. Thankfully, Johny agreed, and yes, it will benefit him too, all thanks to the extra fame.

1. Can you please introduce yourself?
Hi! I’m Johnny Goodluck! Guys guy, bartender, chef, musician, stand-up human, and yes, pro-male performer. I’m an East Coaster trying to get along in LA, living off of skill, drive, and being a good person.

2. I’ll be honest with you. I never knew that you were the exec chef. How did that happen?
Everyone has their passions. Mine is cooking! I have always cooked professionally since I could legally work. It’s all I’ve ever done until I started my own business, which led me to different entrepreneurial avenues.

3. What’s your opinion on Gordon Ramsay? What are or were your idols in this area?
Gordon is a beast. I love him. I went to culinary school with one of his chefs, and his BUR GR bar in Vegas is easily the best burger I’ve ever had in my life. I also idolize Thomas Keller, Michael Symon, Alton Brown, and my old boss Roy Yamaguchi.

5. What was it like to work behind the scenes? What did you do?
I cooked on set to start. Everyone from Burning Angel knew I was a beast chef, so they’d pay me to cook for shoots or shop and do craft services. I got booked by Mike Quasar for more than Burning Angel shoots. I eventually started doing sound and PA work for Wicked Pictures.

6. Tell me about your first scene. Were you anxious about the performance?
My first scene was with my wife, Draven Star, for Hustler. I wasn’t nervous at all! I even had friends sitting and watching. I’ve never had hold-ups about sexual acts in front of people.

7. Can you give a few tips for guys who want to last longer in bed?
It’s called “male Kegels. ” Look it up! It’s the key to self-control! There are muscles you can exercise to be able to “hold your load”.

8. How did you come up with the “Johnny Goodluck” name?
I was at AVN my first year. Just a roadie for Burning Angel. They said I needed a name. I said, “how about Johnny? Like John=Trick=Mark, it’s a hooker reference because life is similar. I also said Johnny can go in front of anything. I could be Johnny Asshole or Johnny Fuckboy or Johnny Douchebag… Draven replied “Goodluck!” As in good luck with that…I said “yes, Johnny Goodluck, so it is written”

11. Most guys think that getting paid to fuck is a dream job. Can you name a few cons?
It’s super hard work! It can skew your perception of reality regarding life, love, marriage, and especially sex off camera. You’re pretty much an athlete. You have to count on your body to perform. I’ve never met a male performer who didn’t put much mental pressure on themselves, and if you can’t perform, you don’t get paid and ruin your reputation. You can lose your porn status just as quickly as you got it if you can’t make your body do what they expect.

13. What’s next for you?
I’m going to keep producing my work. Work on getting better at writing and directing. This includes my current project “Bar Luck”. It will be a YouTube Channel about bar life, Bar-tending, and Booze Knowledge.

14. What does your average day look like?
Weekdays are office work and housework. I have to clean and do computer stuff like normal people. Some days I shoot, some days I bartend, and some days I do both! I like to cook dinner, have cocktails with friends, write new shoot ideas, edit, hang with my production friends, and party.

17. You end up on the island, far away from civilization. Pick two adult performers that shall live with you.
I would take Robby Echo and Karma RX all day, every day. They are survivors, well-built, and good people with whom I could get along forever. I know they would harbor the tribe mentality.

Three guys are heading into a bar…
The first two guys walk right into the bar…
The third guy ducks.

Thank you for your time! Keep on rocking.

Interview with Silvia Saige, a Standup Comic and Adult Actress

Interview with Ember Snow: The Master of Her Own Fate 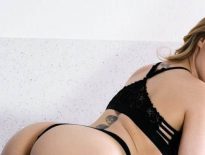 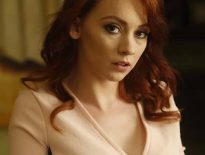