Back in my days pussy piercings meant something, it wasn’t just a diamond or a bubble. Look at that giant metal ring, it was shot through her clitoris. I can only imagine the intense pleasure that was felt during the procedure.

This is nothing but an appetizer before we get to the real meals and desserts. Even her boobs are looking at different directions, wanting to leave her body. We are just joking.

Societies develop knowledge through real-life experiences and I too have learned something unique today. Combined with the questionable boob job, it’s the dreadful fat that will jiggle, not the good bits. As soon as you notice that, this position becomes doomed.

Bit of an amateur, but everyday girls with pierced vaginas are even kinkier, right? If you take a girl out and end up back at your place in the end, what would your reaction be after pulling Sybil’s panties? Most people believe that such women are sluts, but I don’t think so at all. Even if they were, isn’t it fun to fuck someone that loves sex?

Getting fucked by one of the most clueless dudes out there, who just rubs her pussy in the worst way possible. That shit already feels awful, but for a Black Sophie sensations are elevated (and not in a good way) due to the pierced vagina. You can see by her bored expression that it’s not doing anything for her. Someone at Bang website should just fire that idiot and let me fuck Black Sophie.

I was so turned on that the pierced pussy did not even appear on my radar at first. If you try to ignore her gorgeous body and muted moans, there is a tiny ring sitting centimeters away from her butt.

Careful and watch out before these piercings attach directly to your cock and rip it apart. Grinding on a black thick cock, Katrina has another admirer on the right. Yet all he can do is watch and try to stay hard.

For the pierced clitoris geeks, Whitney Wright has a duo of piercings at the inner and outer lips. It also starts shining from her pussy juice when things are getting hot and heavy.

Is this becoming a trend now? Where every slut with metal rings down her private parts must be tested through a scene of interracial sex.

Having said that, would you ever fuck a woman in the bathroom? I’d let her suck my dick with some soap squeezed down her mouth, but man… Is this Las Vegas or what?

All I know is that she has a decent ass, long hair that looks like it was mixed with spaghetti and as you might have guessed, pierced clit. Also, the tramp stamp on her back, so a perfect package for a future mom.

Oh, and there is no denying that she is fucking hot and sexy, like some mythical as beast.

Okay, so where do we begin? Let’s list all the fucked-up shit that she did to herself. Multiple earrings are nothing extreme but might be a first red flag, followed by a choker, and then we have some pierced nipples. Okay, that is not a sign of a healthy individual.

Now add tattoos to the mix, multiple cocks, and of course, the cherry on top: pierced pussy. How can you not love beauty like Samantha?

I must compliment her leg strength as her body is still holding up rather great and has enough stamina to fuck the crap out of this guy. Recent research has revealed that tattoos increase one’s immunity, but what about piercings?

I was never a fan of black chicks but the more I got myself into the top ten lists, the more I have learned to appreciate them, and a black pierced clit is something that is even more exotic and happens once in a blue moon.

While her ghetto hairstyle and cap does not help my boner and probably softens it a bit, there are some other things that I can focus on, like great ass and good-looking tits. Also, she seems like a fun chick.

As she does look like one, minus the ugly face that Anna lacks.

What did we miss? 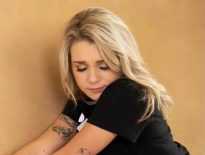